As we enter mid-April, we are enjoying the first blooms of spring and celebrating recent wins in the work for a just Vermont in which we all can flourish. To name just a couple… 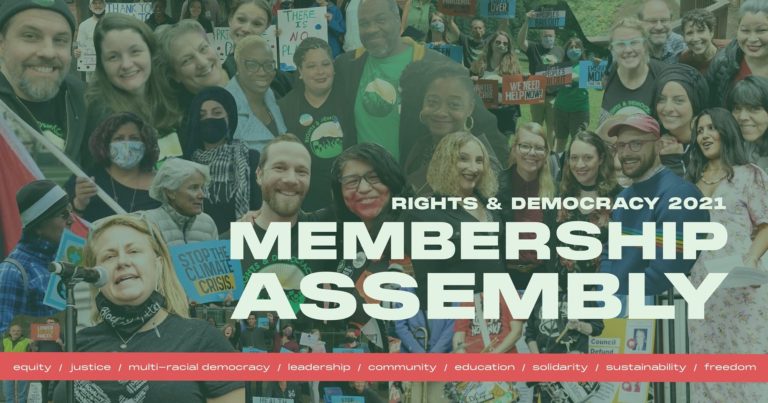 Calling all members – new and old – the Membership Assembly is on the horizon! Every year, our members come together to reflect upon and celebrate our work, deepen our relationships, renew our commitment to this movement, and strategize for the year ahead. 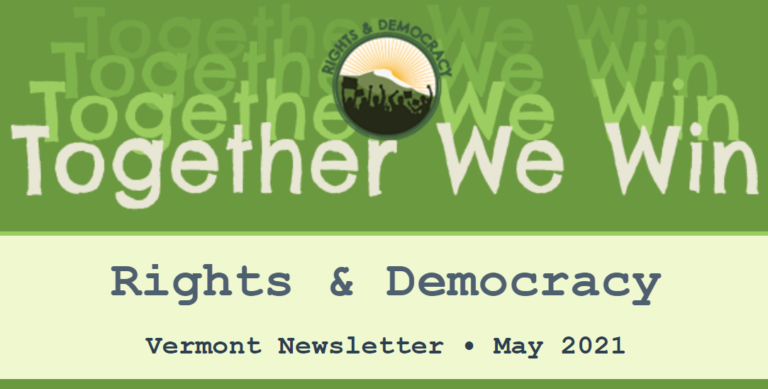 With the warm weather rolling in and more vaccines rolling out, (We’re number one, Vermont!), we were thrilled to kick off this month with long-awaited, live in-person events for May Day.

Housing is a basic need. We are working to ensure that everyone in Vermont is guaranteed affordable, safe, equitable, and healthy housing. Please join us.

We hope you found time for rest and rejuvenation in the final days of December. Here at RAD, we are coming into the new year ready to get to work. 2020 was hard – exhausting, and at times, devastating for so many. We kept our eye on 2021 in the hope that a new year would bring light, clarity, and new pathways for change. And we continue to harbor that hope, but the past few days have been rough. 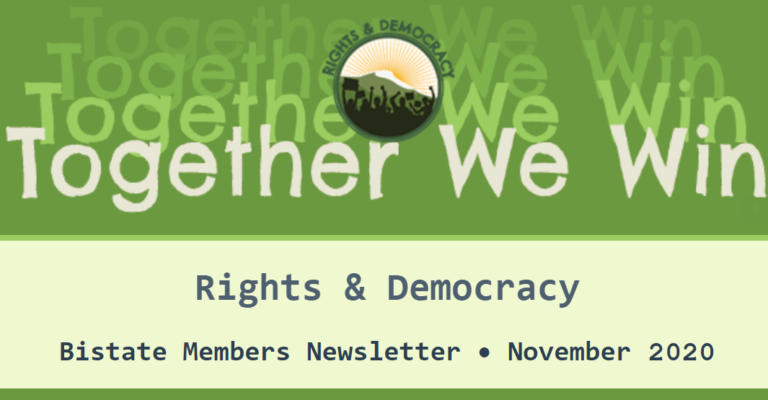 The voters spoke in record numbers. Prominent in that record turnout were working class folks, people of color and women. This was not spontaneous, but the product of months and years of hard organizing 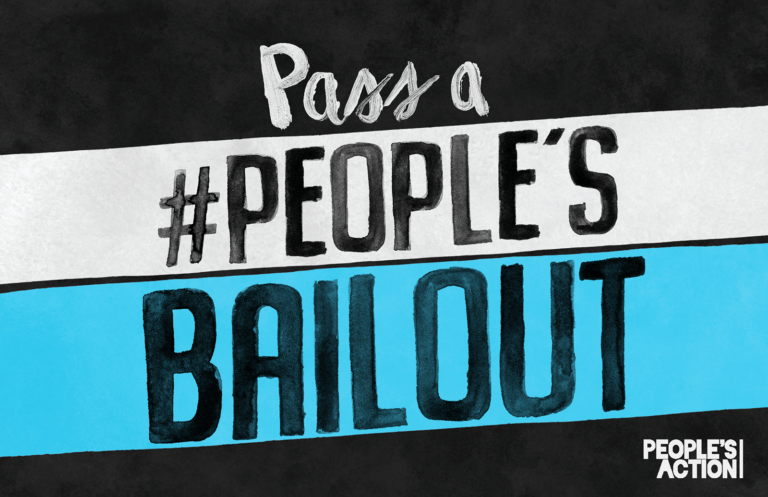 For one of the wealthiest countries to ignore the struggles of everyday people and their families is why we at Rights & Democracy and our national affiliates are demanding that our Senate leaders do their job when they return to Washington, DC next week.

We had a busy April with political roundtables and a COVID-19 Town Hall. As we kick off the month with International Workers Day and our upcoming community Visioning Sessions, May promises to be even more eventful.

The recently released International Association of Chiefs of Police (IACP) evaluation of the Bennington Police Department is just a snapshot of a much larger problem – one that reaches far beyond the boundaries of Bennington. 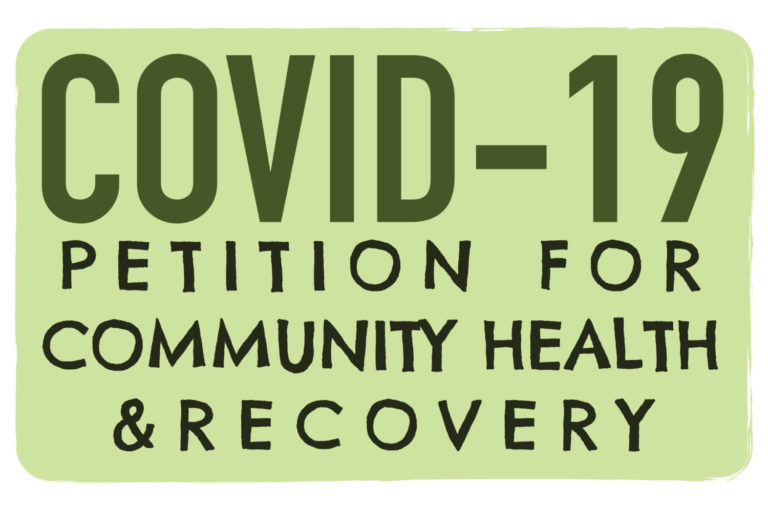 We are calling on Gov. Phil Scott to take additional, immediate steps to ensure the public health and safety of ALL Vermonters, especially those who are most at-risk and vulnerable in times of crisis.

With the rapidly changing the COVID-19 crisis, this is a time when we must pull together as a community and support each other. 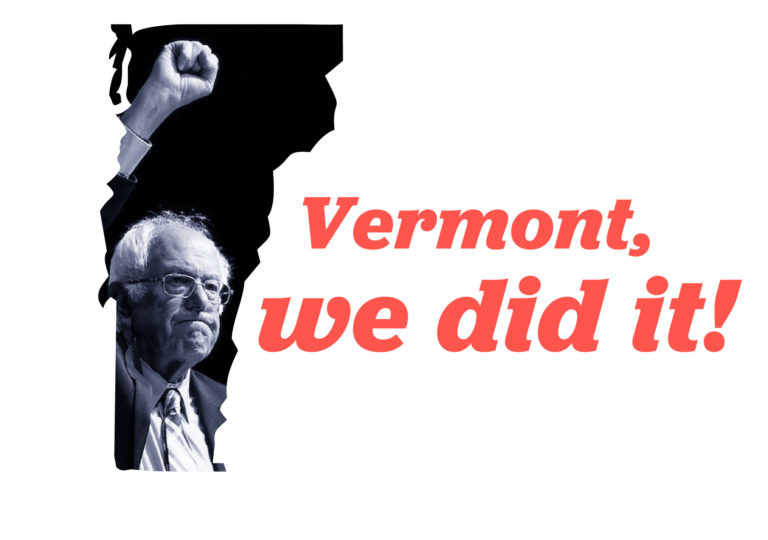 I’m hard wired as an optimist, but today—post-Super Tuesday and after a 72-hour period which saw Bernie Sanders drop from the definitive presidential front runner to underdog—has really put that to the test. 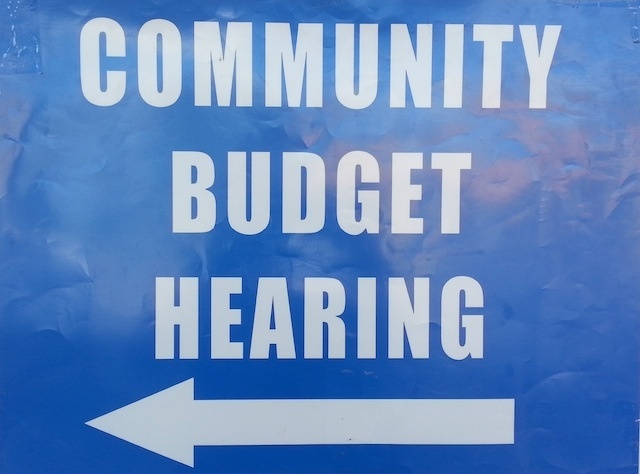 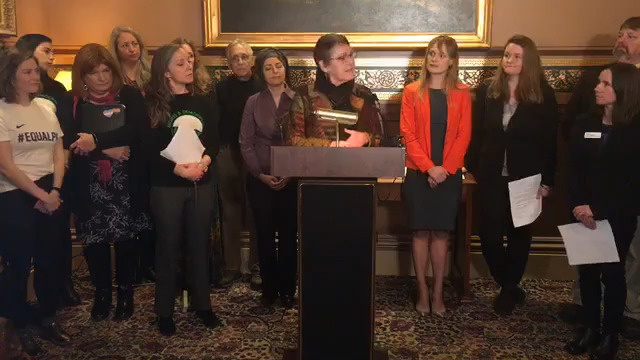 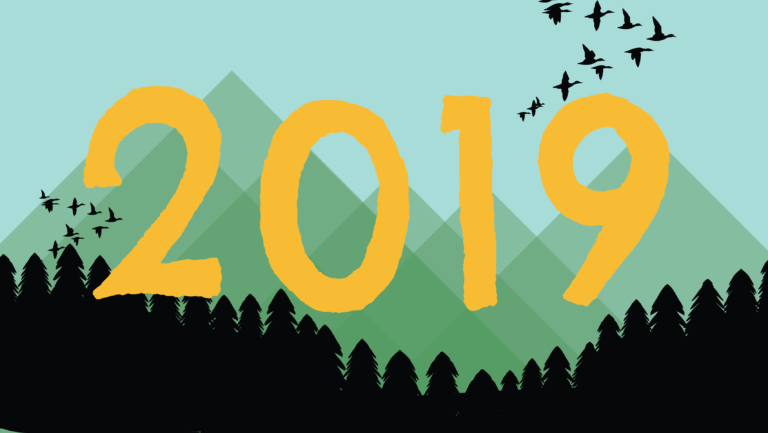 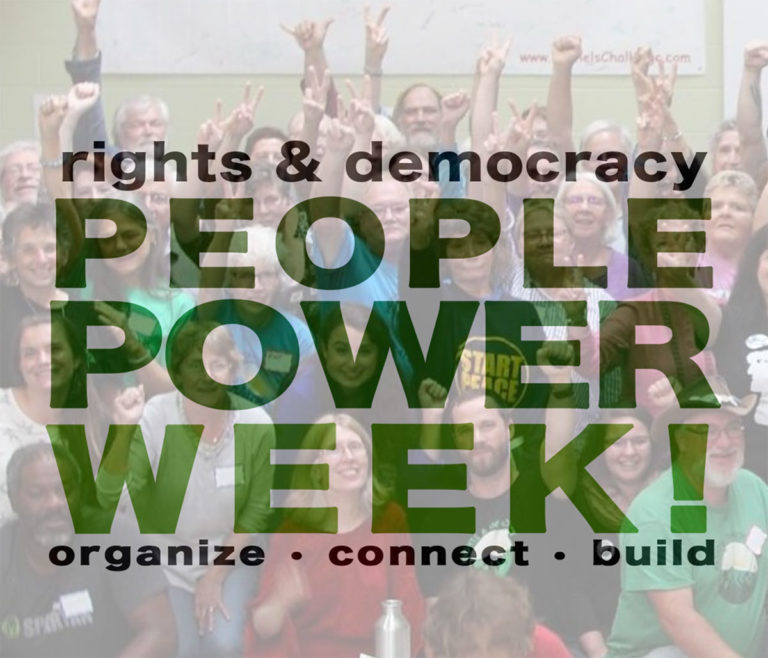 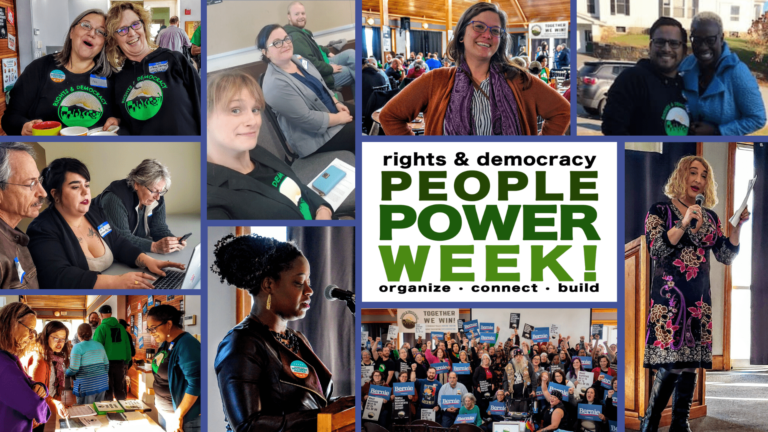 With your support, and the support of your friends and neighbors, together we can ensure make sure that when people say “People Power” in New Hampshire that what they will picture is all of us, together, making the world a better place. Making it a bit more RAD. 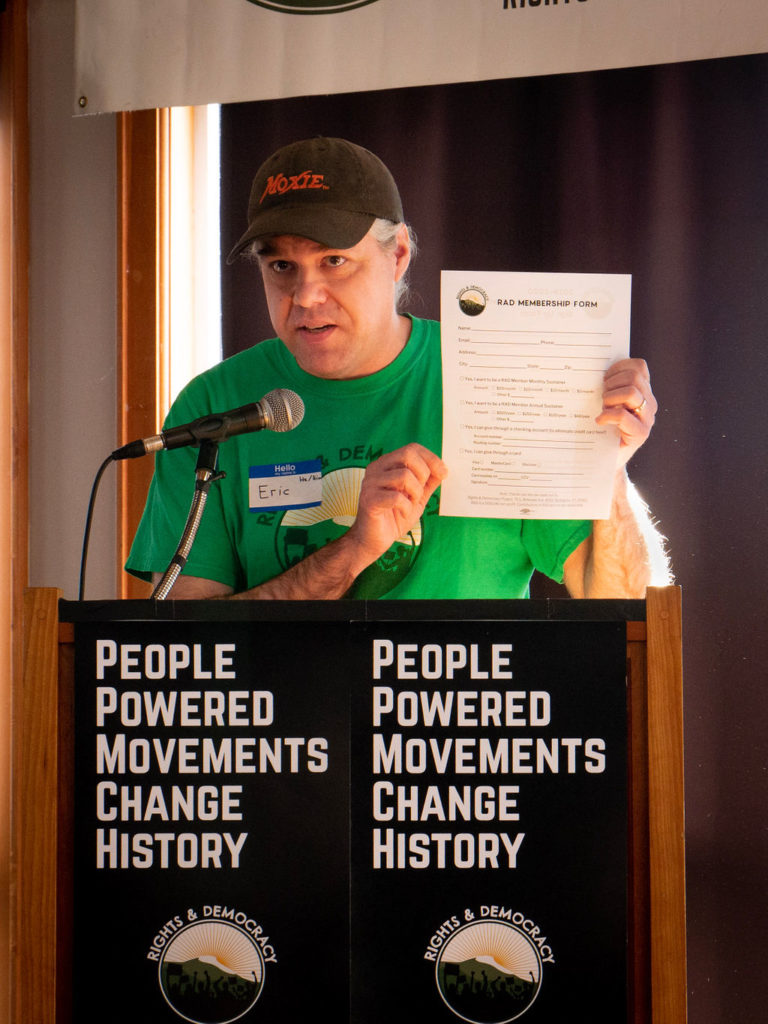 Rights & Democracy is a young organization, and we currently receive the majority of our … Read more 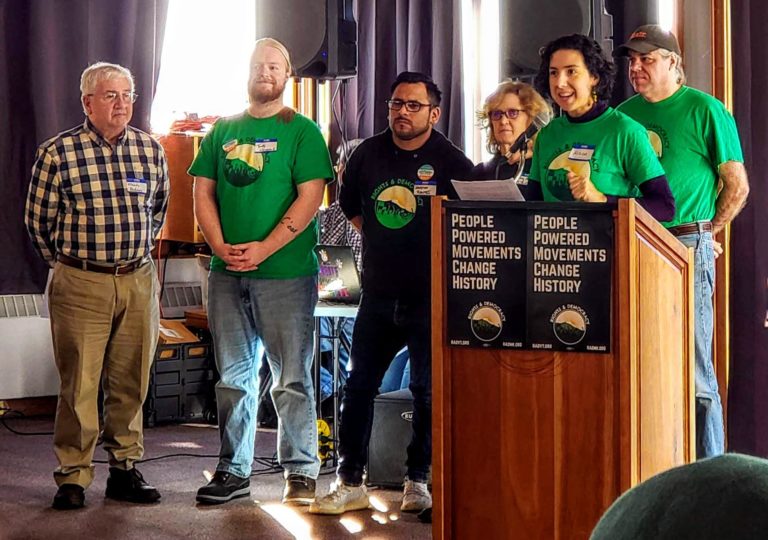 What a day! Thank you to all of our member volunteers, leaders, and staff who … Read more 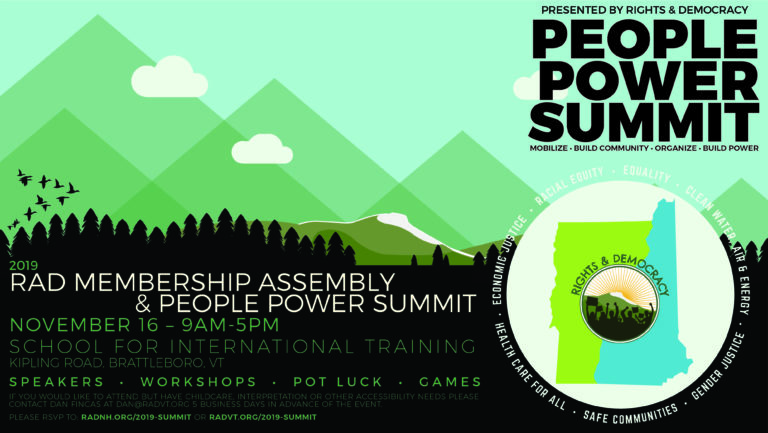 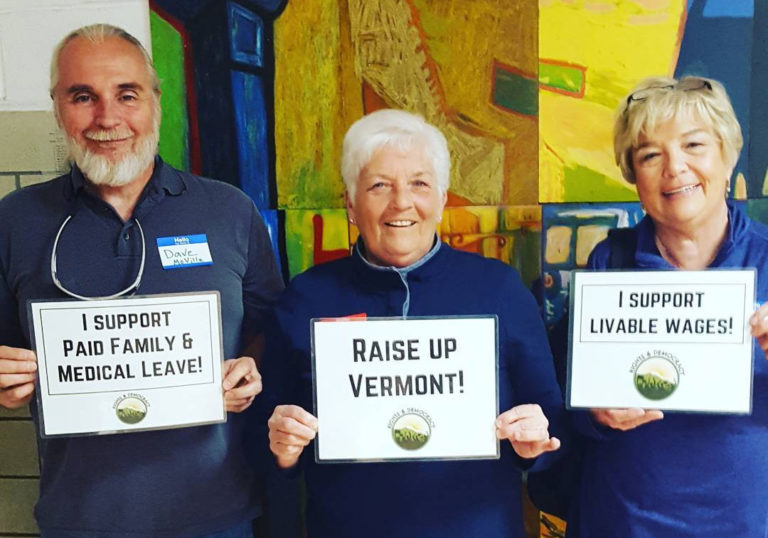 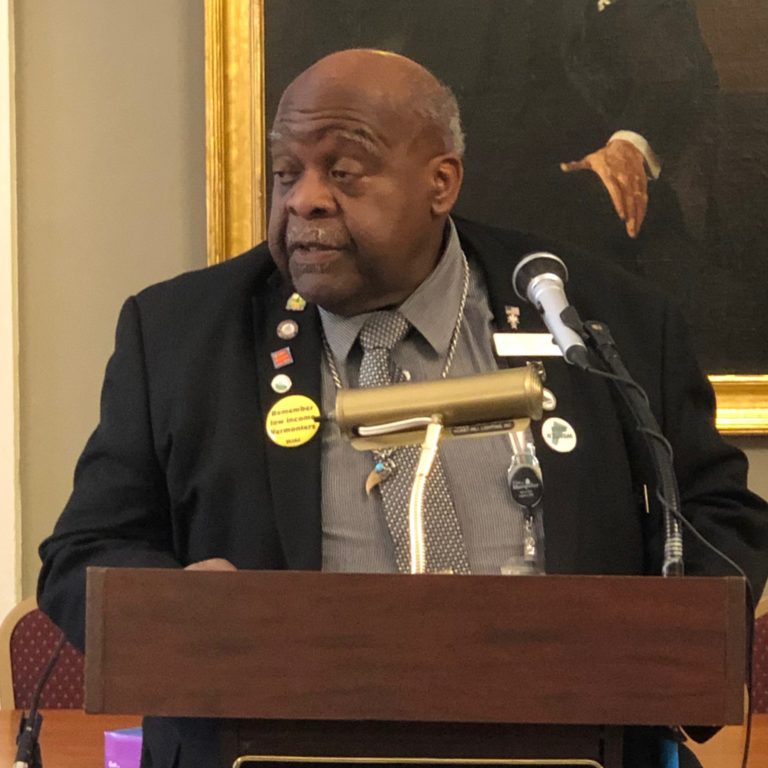 It’s time for legislators to improve the lives of everyday Vermonters by passing legislation that ensures economic equality and sustainable local economies.

That was the message this week from Vermont workers, business owners and community leaders.

Workers, business owners, and legislators called for raising the minimum wage to a livable wage, enacting paid family and medical leave insurance, protecting the rights of workers on the job, providing college-free tuition, and expanding access to child care and training for family-wage jobs, as well as other policies that force too many Vermonters to live on too little to support themselves or their families.

On late Thursday, the Vermont House passed H. 107, creating a paid family and medical leave insurance program, by a sizable margin of 92-52 (with some legislators absent).

“When folks know that their needs can be met, that their rights are protected, and that there might even be some breathing room, then, and only then can we have thriving communities,” said Rep. Emilie Kornheiser (D-Brattleboro), a first-term lawmaker, in her opening remarks to the more than 50 people gathered in Room 10.

With legislative super majorities, Lt. Gov. David Zuckerman said lawmakers would be rewarded for taking bold action on the economy and the climate — key takeaways he’s heard during a recent series of Town Halls sponsored by Rights & Democracy Education Fund.

“I have been going around the state and the turnout at these events has been strong as people are going out of their way to make sure we’re doing something in Montpelier that is creating an economy for all, and a climate economy for all today, but an economy and livable planet for all in the future,” said Lt. Gov. Zuckerman. “When we have the pressure to make good policy in this building come from the people we represent, then we should not wait. Because, if there is a two-year window to do bold things for working people and climate change – this is the time to do it.”

Workers who spoke at the event said it was imperative for legislators to increase the minimum wage and to not only protect workers’ rights to unionize, but remove barriers to making it happen more smoothly and efficiently.

“While I am currently working as a private French teacher, a bookseller and membership coordinator – my income is nowhere near what is needed to live in Central Vermont and to pay rent, food, heating and other basic needs,” said Elaine Stehel. “In this past month, I brought in about $1,100 despite working about 14 hours a day.”

Stehel added that an increased minimum wage to a livable wage will benefit older, college-educated working professionals as well as first-time workers and youth. And it will impact primarily women.